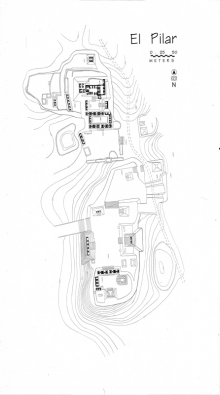 The architecture of El Pilar beautifully illustrates the five major planning concepts of Maya urban design: Symmetry, Axiality, Enclosure, Hierarchy and Repetition. Symmetry and axiality are dependent on one another – they cannot exist alone. The axis is simply an imaginary line between two points, about which forms and spaces are arranged in a symmetrical fashion. Enclosure involves defining a field of space by organizing structures around it to define the flow and use of that space. The concept of hierarchy uses the difference in forms and shapes to reveal the relative importance of structures and spaces. Lastly, repetition of lines, forms, spaces and patterns creates a sort of ‘visual rhythm’ that can be comforting, inviting or even imposing or intimidating in public spaces.

The monumental core of Nohol Pilar and Xaman is organized around several lines of axiality, three major lines in the two main sections to the east and west and a connecting axis. Within these are increasingly enclosed plazas rising in height while the buildings increase in size. The repetition in the form of flanking pyramids, range structures and narrow passageways clearly define each passage from one to the next while imparting a sense of awe as a viewer climbs higher toward increasingly restricted areas.

Through time, the Maya at El Pilar and other centers literally built upon these foundations. They reinforced the original intent by adding structures, increasing size and occasionally completely reforming the centers through massive building programs.

These same principles can also be seen on a smaller scale in household groups. Individual households, like Tzunu’un, defined a plaza space with multiple buildings and an axis with a public entrance and often a ritual structure or small pyramid.

In addition to monumental architecture, El Pilar also exemplifies many important Maya settlement patterns. Many have argued that ancient Maya communities followed a distributed, spread out settlement plan, in which all areas were used. This leads one to picture them as a seething sea of humanity, equally dense in all areas and sprawled across the landscape. While this is technically correct if we consider use, it understates the true complexity of their land use patterns. All areas were indeed managed. But they were used in different ways at different times.

Take residential sites as an example. While all residential sites are associated with some domestic use, not all sites are equal. Historical patterns of Maya subsistence reveal that many families occupied multiple residential sites and moved between them based on varied household demands. Such movements were often seasonal--families would maintain several secondary residences called rancherias in the outfield areas, which allowed them to work on these more remote fields with greater ease and convenience. This pattern of multiple residences split between primary infield areas and secondary outfield locales based on agricultural needs is critical to understanding the ancient Maya distribution patterns.

Dense permanent residential zones comprise only 20% of the landscape, and are clustered in areas with the best agricultural lands. It is in these zones where the community hierarchy was focused and where the civic monuments can be found. Building density is high, with 70 residential units per sq km. But even in these high density zones, the available lands for cultivation are around 1.5 ha (almost 4 acres)—over three times the average infield requirements in traditional subsistence agricultural societies. Even in the dense urban centers, there was considerable space set aside for cultivation of annual crops and orchard trees. Thus, we can picture the ancient Maya center as green cities, filled with home gardens and ample lands for the management of the milpa forest garden cycle.