The Community was Small and Quiet

Well, in Bullet Tree, right now, there are many people living there. It’s not like twenty years ago, when I reached Bullet Tree from Corozal. There were only about twenty houses. Ten more over the river, which is the Manzaneros, and we have about next .... nine houses over a next little village we call Camalote. We have the next little place, we call Paslow Fall, where the witch doctor lives. 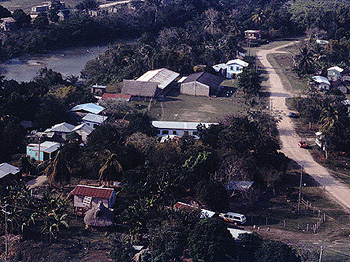 And in those days the houses have only thatch roof,.... only little thatch houses. You never have no toilet, those days they never have no latrines, and things like those. People used to go to the bush. It’s just one or two people that used latrines-toilet , in those days. Ahaa,.... they never have electricity. Bullet Tree was dark. And Bullet Tree was very quiet, calm, nice, a pleasant little place, in 1968. They know what is here, everybody they know which is good from bad.

When I come, they were kind of uncivilized people, when I come here in Bullet Tree. The big people, they are watching through the holes, and they run. The old people hide from you when you are a stranger here, in 1968. People hide from you. A little baby sees you, they run straight under the bed. Maybe you see somebody grinding corn, and when you get close, no one is in the kitchen! The girls hide, everybody dodging. You go there, nobody in there. They don’t like to see strangers, they just like see their neighbors, in those days, in Bullet Tree.

Because the people, .... see other people starting to come in the village, and there is more transportation. When I got there, only one little taxi, running people to and from the village. The narrow road runs people from San Ignacio to Bullet Tree, and very rocky. And it’s an old red car the one aiding the people. This is mostly by horses, that traveled in that road, to go to town.

The people did mostly milpa farming, milpa work. And they sell a little corn, sell their little cohune oil. A pint, or a gill. You know in those days they used gill. Pint, quart, it’s not like now. The teacher, they taught you about gill ,pint, quart, and little spoon full, or thing like that. They don’t learn about that in these days. Everything is different now, from the 60’s. People like .... just change in Bullet Tree. From the 80’s, the 90’s, Bullet Tree has changed. But while growing youths, they grow up, they coming up, Bullet Tree has change. Every year you see a little different change, in Bullet Tree, with the people. It’s not like the days before, there were people seeing you. And it’s getting more lively than the years back.