I don’t know. It’s like I’ve a gift from God that whenever I think something, I see it happen. Such as my mind gives to me something, and, like that,...... it just comes, and click I remember things that passed. Because, many years I worked with the Boss from 1984 to 1994, there are many things that I never saw in my youth. With the same project working with the Boss, where I’ve been turning around in the whole of San Ignacio and here at Pilar. I see everything and always, every project we have something new to see. 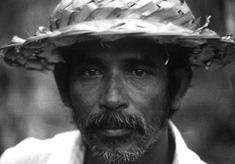 In 1995, the government of Belize took its first step towards the official protection of El Pilar by designating funds for the permanent installation of caretaker Teo Williams. Williams’ unique familiarity with the natural and cultural history of the area was recognized as an asset at El Pilar. Based on one-on-one interviews and hours of recordings and field notes transcribed by the BRASS/El Pilar Program as a research endeavor, a collection of Teo’s local stories were assembled into an unedited stream-of-consciousness manuscript in 1994. The work gained the attention of the Belize Ministry of Tourism and the Environment, which later sponsored the publication of an organized, reworked, and edited edition called Teo’s Way. A devoted scholar of Creole literature, Dr. Colville Young, the Governor General, hailed the book as an important contribution to Belizean Creole culture.