An Individual's Search for the Ancient Maya 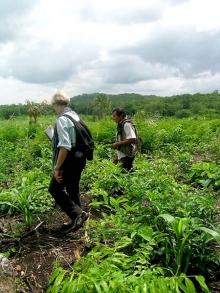 While standard descriptions of the ancient Maya are based on tombs and temples, such unique representations of art and architecture could not have been possible without a large, stable and predictable farming populace. By asking where the ancient Maya people had lived and when, I set out to answer the fundamental question: How did the Maya successfully establish a flourishing civilization in the Mesoamerican tropics? I say the temples were built when the Mayas were feeling good about themselves. Would their strategies for survival be an alternative for us today?

Beginning in a pioneering style in 1978, I mapped a 30-kilometer baseline transect that connected the great centers of Tikal and Yaxhá, deep in the Petén jungles of Guatemala. For nine months of fieldwork living in the Maya forest, I directed El Proyecto Intersitio and it continually tested my physical and mental abilities. Relying on local knowledge of how to live from the forest, I came to appreciate the powers of the environment and what the ancient Maya must have learned to manage over their successful millennia of occupation in the region. Resources of land and water influenced every aspect of my fieldwork, and so, too, it must have affected the ancient Maya. By the end of that year, I had collected not only valuable data on Maya settlement patterns but also an experience that was to influence all my thinking thereafter.

Remarkably, this transect, created for the archaeological study of Maya houses, has survived over the past decades as La Brecha Anabela; a trail for park rangers, tropical ecologists, and adventure-tourists. I have learned from my students and colleagues as well as others visiting Tikal, that La Brecha Anabela is local legend. And my friends from the Petén of Guatemala say I am more Petenera than the Peteneros!

This context has fueled my individual search to explore the nuances of the ancient Maya settlement-environment relationship, documenting and comparing another 20 kilometers of transects in the El Pilar area, some 50 km from Tikal. The students, collaborators, and aficionados who work with me have grasped the concept I have promoted to demystify the Maya, spreading the word nationally and internationally in papers, articles, books, and lectures.

Based on the premise that evidence of everyday life of the Maya is more significant than yet another Maya temple, I have concentrated on the resources that underwrote ancient Maya civilization over time and across space. I have mapped everything from the smallest field houses to the most imposing centers to identify the ancient Maya economic landscape mosaic—the intensive occupation and cultivation zones, the extensively used areas, and the unsettled territories. The patterns are strong. The quality of the soil corresponds to the density of the settlement: the most fertile areas were those around the major centers and the largest in the Belize River area was that of El Pilar. Like other major civic centers of the Maya forest, El Pilar emerged in response to the growth of the intensive farming populace it ultimately served for nearly two millennia.

El Pilar slipped into anonymity from the time of its monuments were abandond, some thousand years ago, until I mapped it in the course of my settlement survey in 1983. Its history is the one we are exposing now. The center is impressive in size and extent, covering more than 20 hectares, including causeways and temples, public plazas and restricted acropoloi that today provide enduring habitats for Maya flora and fauna. My immediate goals were to develop a panoramic picture of the ancient community. Then, I shifted my attentions to the urban center El Pilar in 1993. From the outset, I had something different in mind.

Working at El Pilar implies many things; most important is my commitment to protect the cultural heritage represented by this major Maya center. Over the course of the decades that I have known the Maya forest region, I have witnessed an increase in archaeological looting and the devastating loss of the forest canopy, both of which critically affect the irreplaceable monuments. Thus, national protection and conservation of El Pilar was essential before research there could be fully realized. But more than that, I wanted to create a new way to understand and appreciate the Maya monuments drawing from cultural ecology, from the local villagers, and from my instincts.