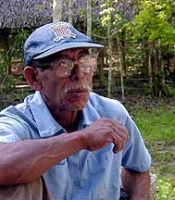 Heriberto Cocom, a founder of Amigos de El Pilar and descendant of a long line of Maya healers, died in November of 2012. He was an invaluable resource of knowledge and experience in the plants and practices of Maya Forests, as well as a great friend to the El Pilar project and his presence is greatly missed. In the spirit of their ancient practices, Heriberto procured for himself knowledge of medicinal cures. His father was a snakebite healer whose best friend was renowned Maya medicinal and spiritual healer, Don Elijio Panti.

At the age of 14, Don Beto, as he wasknown, crafted his first marimba and guitar. Fearing travel to Belize City, the only place where a secondary level institution was located, he intentionally failed the exam which would allow him to progress in his studies. In doing so, he was able to tailor his education to his own interests. He proceeded to learn many trades such as carpentry, gardening, landscape farming, and chicle harvesting.

At the age of 24 he was able to cure two snakebite victims by implementing what he learned from his father. Later, Don Beto realized that by practicing what his mentors taught him, he could help keep Maya traditions alive. He recalled, “I saw the need for someone to go ahead and teach the traditions that Mr. Elijio Panti left.” Always full of life, Don Beto continually provides information about traditional healing practices to all who will listen. His knowledge of the forest was immense. He could identify 540 species of forest plants with their significance. Because none of his sons show interest, Don Beto worried future generations may lose the knowledge he worked so hard to secure.

At the time of his death, Don Beto owned 15 acres on which he established the  Masewal Forest Garden. The Garden was once open to the public thanks to collaboration with Dr. Anabel Ford and Raleigh International, whose volunteers assisted in the construction of the trails. Don Beto had support from students, locally and internationally, and from  the Corner Stone Foundation that assists with his financial challenges. Don Beto had offered medicinal healing at no charge to his patients; he felt honored that people recognize him as an important and talented healer. Don Beto was married at the age of 21 and currently has 7 children none who followed him in his traditional practice. His wonderful forest garden with all its amazing healing plants is now part of the inheritance and libel to be broken up among the hiers.